Now here is an interesting movie. Inspired by actual events, a group of mature women make a calendar in memory of the late husband of a member of their group. Problem is the product in question is rather scandalous. “I didn’t hear him use the phrase ‘whip your bras off.'” 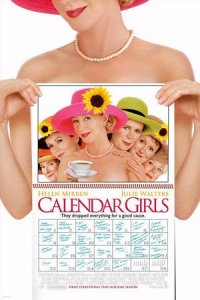 I love both Julie Walters and Helen Mirren, and I’m glad to see them in a movie together. Especially as best friends; goofing around as well as supporting each other. They really did look like long time friends in this film. Their chemistry was awesome. And that’s important, especially considering the awkwardness of what they set out to do.

What I love most about this movie is that it really happened; not exactly like the film, of course, but you know. If this had been just another fictional story I would have gone “Yeah, like that could really happen!” But these women did and have made sequel calendars, as well as a few less racy products, all for charity in Mr. Baker’s name. According to their website beatbloodcancershop.com, they have collected over £ 3 million for cancer. It’s very touching, what they’ve done, and even though the remaining women have made their final calendar in 2012, I hope they continue to raise money for their cause.

I think this is a cute movie with a big heart. I love the friendship between the group of women as well as their support of each other as the reality of what they’re about to embark on set in. Truly worth a watch.