I’m not the biggest Will Ferrell fan. I feel like he oversells his comedy, and it definitely shows here. I find him ten times funnier in his SNL skits than in the majority of his feature roles. Some of them were obnoxious, yes, but I felt he was being a character, not Will Ferrell being “funny.” When you reach for funny, it generally doesn’t come across with the intended result. Despite all these great comedic actors and great actors in general, all this movie did was reach.

Hands down, best part of this movie was Steve Carell’s Uncle Arthur. He tickled me pink! Completely forgot that he was in this movie. I don’t remember Uncle Arthur in the original show very well, but Carell was just perfect! I’d watch it again only for him. Second best part 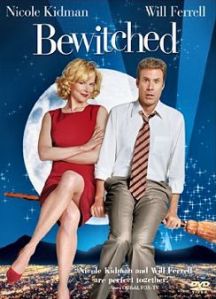 was Michael Caine as Isabel’s father randomly showing up throughout the movie and the announcement of his arrival. Especially the scene in the grocery store. The writers got creative on that one, and I’m glad they did.

Plot line was okay. A on-the-verge-of-being-a-hasbeen actor wants to remake and star in the TV show Bewitched. Only he and his agent want to revamp it so that it focuses more on Darren than Samantha. Real life mirrors the TV life when unbeknownst to anyone, they’ve cast a real witch as Samantha, Isabel, who just wants a normal life with normal problems. Let the spell casting begin! [SPOILER ALERT] After many ups and downs they both start to realize they like each other. Isabel reveals to Jack that she really is a witch, and Jack freaks out. Then Jack realizes he loves her, and they live happily ever after, very much like in the show: she’s a witch, he’s a mortal, and they move into a great house with some nosy neighbors.

I loved that they showed clips from the actual 60’s show. There were also a couple of quips regarding the show. And at times their real lives mirrored that of the show’s story. In terms of the movie though they could have done a bit better. I could have done without the rewind feature. If the only way to undo a spell is to set back time then there’s really no fun in that. Granted, neither is there any fun in just taking it off the spell, but this isn’t rocket science, it’s creativeness! I also wasn’t the biggest fan of Nicole Kidman’s voice choice. Was the high, whispery voice supposed to convey just how innocent this young witch was to the matters of the world? I guess it worked for her character, but I feel like there could have been a way around that. And they didn’t do enough with Shirley MacLaine’s character; that was a complete waste. Why set us up for questions if you’re not going to follow through with that lead?

I love most of the people in this movie, I like what they tried to do, but this movie just didn’t do it for me.