Then vs. Now: Willy Wonka vs. Charlie 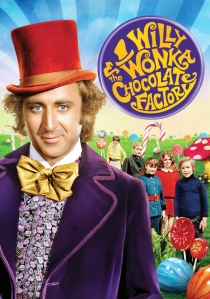 I love Gene Wilder; he’s such an amazing actor. He only agreed to take the role if when Wonka made his appearance he was able to come out with a cane, appearing sickly. The idea behind this was so that the audience wouldn’t be able to tell exactly what was going through Wonka’s head for the rest of the movie. I just love that he’s got this attitude of a genius surrounded by idiots. He ignores questions, plays with words, switches languages, and rags on Mike Teevee throughout the entire tour of the factory. Wilder is my Willy Wonka, and no one will ever be able to hold a candle to his performance.

I would love to understand the reason/meaning behind the weird f’ed-up boat ride. Is its sole purpose to show more of Wonka’s craziness? I think it compliments Wonka’s entrance in a way, because we, the audience, have no idea what to make of this. Turns out this guy might not be as benign as he looks. A chicken being beheaded, a lizard eating a bug, a centipede on someone’s face, an eyeball. “Is this a freak out?!” I guarantee you anyone who’s watching that scene for the first time is yelling the same thing.

I love the inventing room. There’s just something satisfying about having sets like that which work. They made a machine that punches dough and squashes tomatoes! A bike is set up to stir either whipped cream or frosting. No one does that anymore! And the everlasting gobbstopper machine just had to look like it was doing something crazy. In the newer version the inventing room looks more like something out of Beakman’s World; way too science-y, not enough creativity.

This film shows us not only how not to behave as children, but also how the adult world is very similar to kids gone wild in a candy store. And they really get into the mania and obsession of find the tickets more so here than in the 2005 version. Kidnapping people for the ransom of Wonka bars, smart-alec smart-computers, shrinks demanding their patient’s dreams of where to find the next ticket, and even the Queen of England showing up at an auction house… It’s true, adults revert back to grubby, grabbing children when they get greedy.

Now we have the 2005 version entitled Charlie and The Chocolate Factory. This one was directed by Tim Burton, so it definitely has his weird and dark style. This was not a remake, but an adaptation; however, it feels like a remake, and I personally didn’t believe it was necessary. Hollywood should be focusing its energy on fixing its flops, not its successes. I guess technically the first one was considered a flop at the box office, but it has become a cult-classic since then. But there are people out there, like the author of the book for instance, who did not like the 1971 musical, so I can understand the want for another. For an adaptation it was pretty good, but my vote still goes to Willy Wonka & The Chocolate Factory.

The main theme of this film is family, which is a little ironic 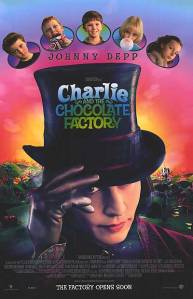 seeing as how I felt more concern from the parents in the 1971 movie. However, both Charlie’s and Willy Wonka’s fathers are included in this version. Someone in the higher-ups wanted to eliminated Charlie’s father from the film again, but Tim Burton felt that Willy Wonka wouldn’t make a good father figure to replace Charlie’s actual father, and I’d have to agree; this version of the character wouldn’t. I don’t care for Johnny Depp’s version of Willy Wonka. I can get over his look, but it’s his mannerisms and attitude that I don’t like. He is socially awkward and has some major family issues. He’s both a child and a recluse. Depp pushed for weird, and he went overboard.

The factory seems to be lacking in imagination to me. There are sporadic spots of crazy imagination, but the rest of the factory seems modern and dull. My husband pointed out that the first movie is childhood realized, whereas this film is a lack of childhood. I can see that, but at the same time I don’t. With the removal of the rules placed upon his childhood by his overly-strict father, Wonka should have been able to explode with creativity. Instead his twelve-year-old self seems more grown up than the adult version.

The Oompa Loompa songs, while they are catchy and vary for each child, should be more focused on the children’s faults than the children themselves, whereas before the songs were a general message to children and parents in the audience. “Don’t be a brat,” “don’t guzzle down sweets,” and “go read a book,” turned into “great big greedy nincompoop,” “chewing, chewing, all day long,” and “Varuca’s newfound friends that she will meet as she descends.” Mike Teevee’s was the only decent one in that regard; singing about how television stifles creativity and rots your brain.

There was more mystery to the first film. Here we received more answers, but the telling of the story seems to be lacking. I suppose the 2005 version is more kid-friendly, but I find the 1971 musical to be more endearing.

1 Response to Then vs. Now: Willy Wonka vs. Charlie